#prochoice I am NOT an Incubator

🖋 Sign “Americans aren't incubators” and I’ll deliver a copy to your officials: https://t.co/WAW3jSNcaa

Email ThisBlogThis!Share to TwitterShare to FacebookShare to Pinterest
Labels: pro-choice

Reflection:
It was a pretty fun month. I visited a couple of cool blogs.
Some of my posts were more like tv fan fiction than short fake episode descriptions.
Bones got 13 comments.
Family Guy was a full script with CURRENT EVENT humor that a commentator felt matched the show's humor.
Grey's Anatomy is my favorite show. I wrote an ending episode that would fit perfectly if this show ended this season. I may have predicted some things that have/will happened on the show. That's going to be my Road Trip link.
Nailed It! got no love, but Nicole is awesome.
Supernatural 2 Broke Girls (a completely impossible crossover episode) was so fun to write.
Veronica Mars was not the draw I expected.
West Wing, I did have a little rant because of current US events, but still, thought it would have been more popular.
🤷‍♀️
I also did an Iron Chef 🇺🇸 episode. And today it was announced that show is BACK and going to be on Netflix. https://www.facebook.com/100044181828660/posts/542069623942427/
I definitely had more guests and comments than usual. That's why the challenge is awesome.
My theme came to me while scrolling for a binge-watch.
I did the #azchat on Instagram. I  am still banned from Twitter for threatening the negative voices of self-doubt, but maybe that will change with Musk?
Will America's future look more like Eureka and Star Trek, or have we plateaued into a permanent cycle of Roe v Wade and the Scopes Monkey Trial? I'll probably blog about that eventually. My state of Pennsylvania has a big election coming up. My blog doesn't usually feature tv shows, but rather fiction and rants.

The team is great. The story on J's blog was cool. Easy to use Google spreadsheets and forms. The graphics match the usual, so that's cool. Looking forward to next year. 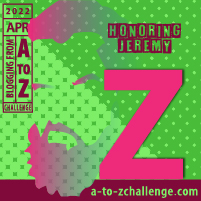 Johnny touches a keyboard. ⌨💻📱 A vision!
There's a blogger staring at their blog and feeling lonely and sad. 😔
Not enough visitors? Not enough comments? But the blogger blogged all month! Really interesting stuff.
Johnny goes over to Sarah's place.
"Have you heard of blogging?"
"Yeah, Johnny, I wasn't the one in a coma for years."
Sarah and Johnny 🧠🌩 brainstorm ways to bring more comments and visits to the blogger.
Johnny gets another vision.

"I have to visit a guy named Arlee. He'll create a blogging challenge using the alphabet. It will bring the community together. Every April, hundreds of bloggers from all over the world will post and visit each other to comment. That will help the blogger I'm seeing feel less alone." ✈

And the rest is history. 😉

Email ThisBlogThis!Share to TwitterShare to FacebookShare to Pinterest
Labels: #atozchallenge, The Dead Zone

#atozchallenge How I Met Your Mother 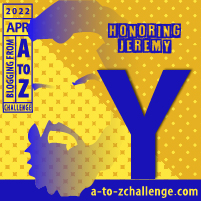 Marshall eats 30-cent tacos from a corner truck. Everyone thinks he'll get sick from them. 🌮 He doesn't, at first, but then he eats too many. WAY too many. Barney pays the truck not to serve Marshall.
Lily, Robin, and Barney go to a concert. Robin gets on stage.
"Boobs?" Barney asks.
"I know people," says Robin.
"People who like boobs?" Barney jokes.
"I was a Canadian pop star." Robin flashes a smile.
At the end of the episode, it's revealed Lily flashed Robin's boobs.
Ted goes to a laundromat. He runs into his ex. They had a lizard together. She gave it away to another boyfriend. While they're doing laundry, his sweater gets mixed in with her stuff. It's clear he has a chance to go home with her for sex. But then she ruins his sweater.
"She gave away our lizard and she ruined my sweater!"
"Ted, you could have gotten laid," Barney yells.
Ted repeats himself.
"Gotten laid!" Barney repeats.
They turn to Marshall.
"Yeah, I have to agree with Barney on this one. Lily, flash Robin's boobs to Ted. He's forgotten how great boobs are."
Everyone laughs. Ted is disappointed that Robin's boobs aren't actually flashed.

Email ThisBlogThis!Share to TwitterShare to FacebookShare to Pinterest
Labels: #atozchallenge, HIMYM, How I Met Your Mother 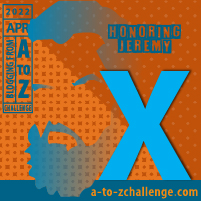 Time to TRUST NO ONE!

Mulder and Scully are out on a boat. Scully is swept into the ocean. Once she's back on board, she asks, "where is he?" Then describes a handsome young man with curly blond hair and stunning green eyes.
Mulder is convinced she was saved by a merman. Scully is not.
"Must have been a dolphin."
"With blond hair?"
"I was deprived of oxygen. I hallucinated. Or there's a person down there. A drowning victim."
They investigate. Treasure is found. But no people.
For those who believe, no explanation is needed, for those who don't, none will ever do.

#atozchallenge The West Wing and Bowling 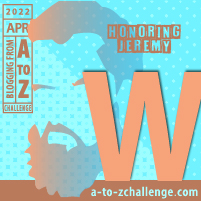 The Bartlet Administration. 💕
CJ and Josh help the president address the public over rising fuel prices and the president's part in controlling or influencing prices. Abbey works with a medical professionals' rights group to create a presentation for Congress on the importance of menstruation products being available for free, pap smears and HPV screenings being fully covered, and a guaranteed right to put one's own health and body first before any cell clumps.


(Including the right to make the choice to fight cancer rather than die pregnant. BECAUSE WE WOULDN'T WANT SOME STATE TO OUTLAW THE RIGHT OF A LIVING AMERICAN TO FIGHT CANCER FOR THEIR OWN SURVIVAL. NO, WE WOULDN'T LET SOME LAW EXIST THAT DECLARES A PERSON WITH A DEADLY DISEASE LOSES THE RIGHT TO TREATMENT IF THAT PERSON BECOMES PREGNANT- INCLUDING NOT BY CHOICE PREGNANCY- AND THEREFORE, THEY ARE CONDEMNED TO DEATH AS IS THE FETUS. AND NO, THEY AREN'T ALLOWED TO LEAVE THE STATE, EITHER. 😤 Can't imagine that happening 15 years or so after this show went off the air.)
Texas
Several States
Missouri
"laws that clearly violate an individual’s constitutional rights, rights that have been recognized and protected for decades, are now going into effect and impacting whether people can get care,” said Emily Wales, president and CEO of the Planned Parenthood affiliate."
While his wife is at it, the President presents a bill requiring any state that creates a law forbidding a pregnant person from leaving the state (for any reason, including possibly getting a medical procedure), must present that law in plain language to every potential person, and any family coming with them, who is being recruited to their state for research, employment, or schooling. They must be made aware that if they move to that state and become pregnant, they might not be protected by the laws of the United States.
Then another bill to declare that a miscarriage is "an act of God," and therefore may not legally be considered a crime. Any state found trying to subvert this is subject to a billion-dollar fine per incident. And EVERY penny of the fine is donated to Planned Parenthood. (That's Billion with B. 💰💸)
Then Bartlet and the crew go into the White House basement for a bowling tournament. Leo wins.

My brother is in the Redneck shirt, dad is in the white shirt.
Posted by Jamie at 1:00 AM No comments:

"When Elon Musk reached a deal to buy Twitter on Monday, he promised to return free speech and debate to the platform, saying it was “the bedrock of a functioning democracy.”

Whether a less moderated social network will be a good or bad thing has become a top topic of debate on Twitter itself among influencers and politicians from across the political spectrum." NYT

If I WANT to stay on Twitter will remain to be seen. But getting kicked off for seeking to improve my mental health still bothers me to my core. So I sent this message, again. We'll see.

I know I didn't threaten an individual or group of people. I did threaten a non-corporal intangible construct (my own self-critical voices).

(https://uniquelymaladjustedbutfun.blogspot.com/2021/03/silence-i-kill-you.html ) I do not believe I promoted terrorism or violent extremism because the celebrity comedian I quoted is still on Twitter, and the joke I used about killing my own self-critical voices is still available on Twitter in gif form using your own search. (https://twitter.com/jeffdunham)

My own self-critical voices are not a person or people, and therefore cannot be targeted for harassment or abuse, as they do not actually exist, and certainly are not now nor have ever been children.

If the link to my blog post was such a form of sensitive media, then that EXACT SAME MEDIA shouldn't be available as a gif on your site in your own search. (https://media.tenor.com/xX0VFUYfUa4AAAAM/jeff-dunham-silence.gif)

It's actually the path to IMPROVING mental health and taking charge of your own life.

I am asking only to be treated the same as others. Or for an explanation as to why I should not be treated the same as others. Or, at the very least, to know how I have been WORSE than the person I quoted (their joke), in such a way that I may learn how to become a better person. Because I do not understand what about wanting to deal with my own self-critical voices is a violation of your TOS. 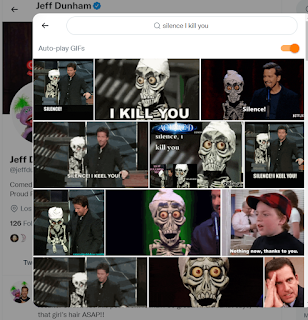