This April, I'll be presenting a short story featuring my character, Liv. She's a psychic who just inherited her father's home. But to be able to afford to stay, she's going to need to get a roommate or two. This is a prequel to the book I'm writing with two other published friends.
Posted by Jamie at 4:00 PM 14 comments:

Email ThisBlogThis!Share to TwitterShare to FacebookShare to Pinterest
Labels: #atozchallenge

Will the 15 Minimum Wage Work

The negative responses I've read to the $15/hr minimum wage increase are all about "I already make that amount, does this mean I'm now gonna be a minimum wage employee??? That's not fair!"

I think that protests the wrong issue. What concerns me is if the pay hike doesn't come with price increase restrictions, what will happen to costs? The purpose of raising it is because necessities have become more expensive. But is there a law to keep them reasonably priced so a minimum wage worker can spend just the suggested quarter of income on a home?

That's about half of what I pay in rent now, and I'm living in el-cheapo. 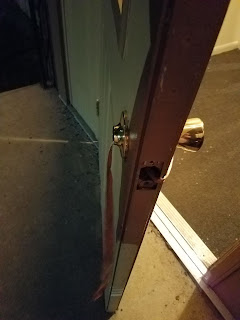 The door knob to my building broke. It was replaced with a ribbon for quite some time.

I'm not saying there aren't worse places. But our level of security was "tug the ribbon to get in." Stray cats mastered it on the second day.

So, yeah, I believe there should be required apartments for rent for $487 a month, and while they don't have to be fancy, they should meet some minimum requirements. (Working smoke detectors, no wires dangling from the ceiling, handles on doors, proper hallway lights, etc.) Not to sound all "first world problems" about it, but maybe those become the homes assigned to Congress. That's the new governor's mansion- the exact place that their lowest paid constituents live. Because to serve the people you need to know the people, understand what they go through.

Mostly though, I just don't want to hear one more economist jabber on about only spending 25% of income after taxes on housing, and not knowing that such places don't exist everywhere, especially the places with lots of jobs and in good school districts. They make up budget charts for living in fairytale lands. If you want the charts to matter, set laws that make it possible. Cap rent, food costs, transportation cost, etc. Fight the fire on both fronts.

Silly me! I've been spending money on a home and healthy food. What I SHOULD be doing is living in my car 🚗 (which I shouldn't insure despite the law), eating three $1 meals a day,  and only buying my prescriptions. No more electricity, Internet, rent, or paying other bills (cause no more address so they'll have a hard time finding me). My phone is probably my want, so maybe I get to keep that. Sure, I'll probably die from exposure to the elements, especially with my health. But I'll be a millionaire, so at least I'll be able to afford the funeral. 🤦‍♀️

The advice would be good, but it's just not realistic. Because the other thing they have is either a starting pile of family money or a job that makes more in a month than my household does in a year.

I wake up in our home. It's big enough to hold all our stuff without being cluttered, and without having to discard our stuff to make it uncluttered. Someone else comes two or three times a week to clean. All the meals are prepared already, and are healthy, and none of them make me sick. The bills are paid without worry,  because there's always more money in the bank and no worry it'll run out. I sit in my office and write. Pain doesn't stop me. I can breathe. John and I go for a walk before dinner. It's the kind of neighborhood where a couple can go for a walk safely. We relax together after dinner,  watching movies or whatever. I'll see my friends on Tuesday, maybe on the weekend too. My family might stop by. My brother is happy.  He has his son back. He let go of the hate and anger.  My Aunt and Uncle no longer have diabetes, and they're not going blind. They come over to play with our cats. Because we have cats. Our in-laws come to visit once in a while too. Or we visit them. Because I can breathe, so we can do that. And we're going on vacation, not only because we can afford it, but because I don't have to worry about the temperature of the place and if my body can keep up. We don't have to pack medicine because we don't need it because our bodies aren't rejecting life. We're happy. And not afraid of the future. We can help more, do more, contribute more. We're alive. We're living life, not just surviving and scrapping by. It's better than fine, it's great.
Posted by Jamie at 5:29 AM No comments: