Am I the only one disturbed when medication changes look and taste? From brown no-flavor to fake cotton-candy. Not "mmm yum,  cotton-candy" but that fake flavor only found in children's medicine. Just wondering if I'm alone in this. Not so much a complaint as an observation. 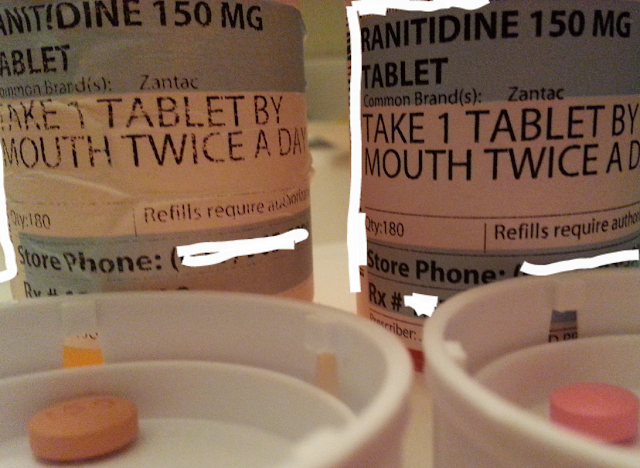 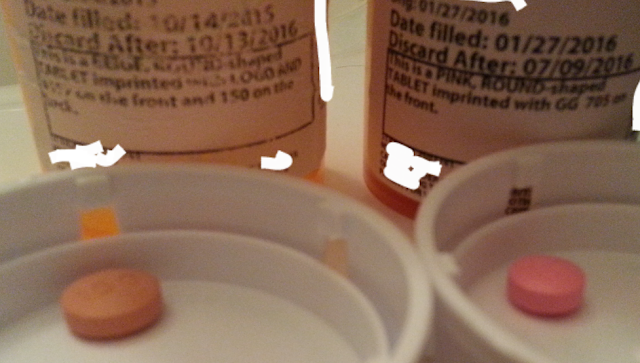 Email ThisBlogThis!Share to TwitterShare to FacebookShare to Pinterest
Labels: ranitdine

Dear Diary or Whatever

I sought the help of another doctor. She couldn't help. She tried. Mostly she ended up trying to help me find someone else who might help. One of them said that,  on top of everything else,  I'm probably depressed. A stranger who has never met me has made this diagnosis based just on my medical history. Not on my actual files or treatments,  but just based on what I told the other doctor.

I fight tooth and nail not to be depressed. I'd rather be angry. And yeah,  I know that's fighting chemistry,  but I don't care. It's fight or die. So I stick with angry. I'll complain adamantly about a broken smoke detector. Am I Ms. Fire Safety?  No. But it's a problem,  and one that I might be able to fix. I can't fix my own body. I can't seem to find a doctor or a drug to improve my quality of life. But I can raise hell over a smoke detector.

Dear Diary or Whatever... I did something dumb today. Just after six pm,  I took my meds. My alarm had gone off,  so as soon as I could get to them,  I did them. I didn't think it through. I was like a robot. I did it with less thought than flicking off a light switch.
I didn't eat first.
And then I had to take my mom to run errands. And I quickly paid for not having food in my stomach. Oh God,  I paid. I wanted to run into traffic. I wanted to bury myself in a snow bank. But,  most of all,  I wanted to go back to sleep. I wasn't tired. But it hurt. It hurt so much. It took me an hour to eat 6 pieces of sushi, once I finally was able to sit and eat,  which was 3 hours later. I forced myself to stay up for another hour. Okay,  45 minutes. I couldn't take it anymore. I passed out.

I didn't think. I failed to plan. I know the consequences and have no one to blame but myself. And I had to write this somewhere. I don't know why.

I'm glad I don't hang out with any mind readers. They'd hear me screaming in my head. They'd know the truth.

I'm not depressed. I'm angry and I'm in pain. And I've lost nearly all hope that it'll be okay,  or better,  or not worse.

Email ThisBlogThis!Share to TwitterShare to FacebookShare to Pinterest
Labels: health

In my dream last night my husband was looking in the refrigerator when he asked me if I wanted the minty bread. I asked him what he meant.

"Is it moldy? Is the way the light hits it making it appear green? Are there mints on it that are altering the flavor?"
But,  like the end of an 80's sitcom,  he was a non responsive statue.

Do all dreams have meaning? And,  if so,  what could minty bread possibly mean? If that's a euphemism for the 1.5 billion dollar Powerball, sorry folks, I didn't win.

I finished the challenge. I got about a dozen chapters read in The Name of the Wind.

There was distraction in my life in the way of a bridal shower. I'm a matron of honor. There was crazy drama mixed in for my bride.

Once upon a time,  my mom was thrilled when I'd go to bed on time and sleep for 9 hours. There was praise and joy that I woke up 8 hours early on Saturday to go do stuff. And minor disappointment when,  three hours after my usual WAKING time,  I was exhausted and felt sick to my stomach from a lack of proper sleep. Welcome to backwards world. These are the joys of living 3rd shift hours. People like it when you stay up all day,  but life requires you to stay up all night. So any sleep is failure. In fact,  the only one who encourages any sleep is the doctor. Unless you have an appointment,  in which case you should get up 3 or 4 hours early.

If you ever need help in the middle of the night,  if you're ever grateful for a package that arrives on time,  or if you use any service while sleeping (like electric for your clock and refrigerator) - remember that there are real humans with real human families that take a world of crap to give you those things. You're welcome. Or... We're all vampires and will slay you like cattle. (Gratitude is good,  but I'll settle for fear if it'll shut up the screaming kids in the hall.) 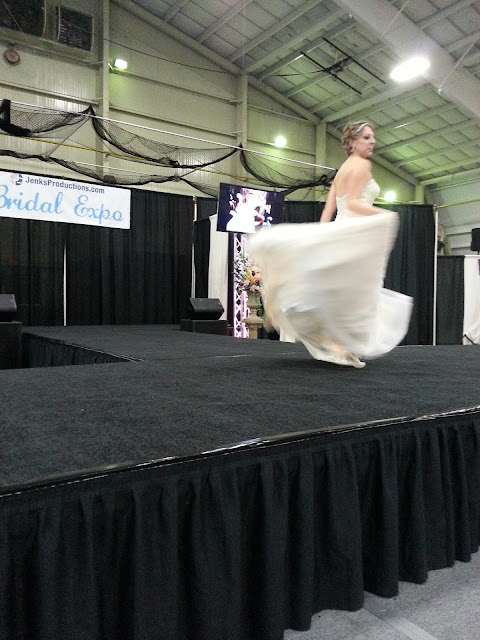 Age Based on Reading

It's just a silly Facebook quiz thing. But I loved my answer! I thought I'd share with my fellow book lovers. 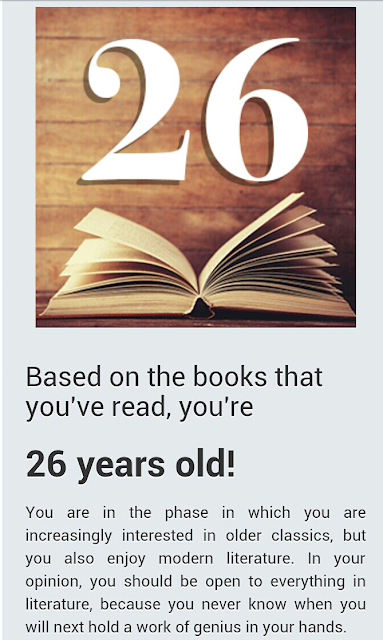 Yesterday was not a very productive reading day. The muse struck, so I was writing. Then cleaning. Topped with some bizarre moments. I only managed another chapter in the book. Something is better than nothing though! #boutofbooks

Which of my "book and a beverage" pics do you like more? 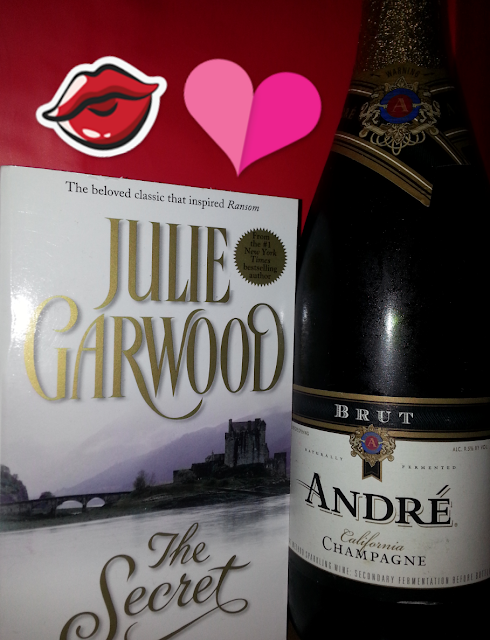 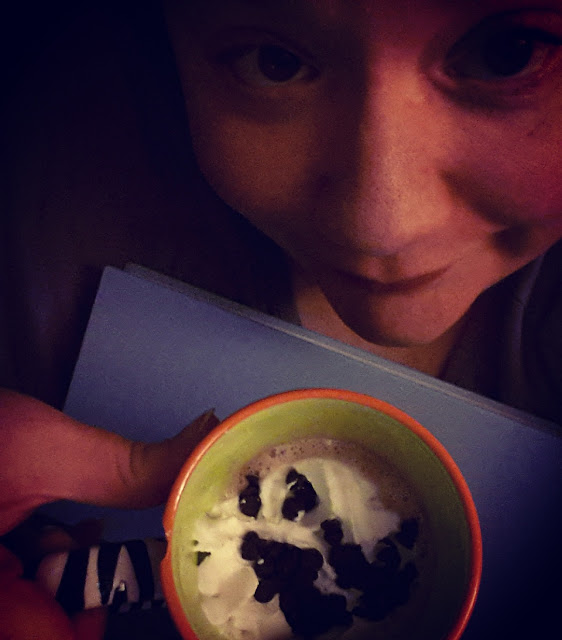 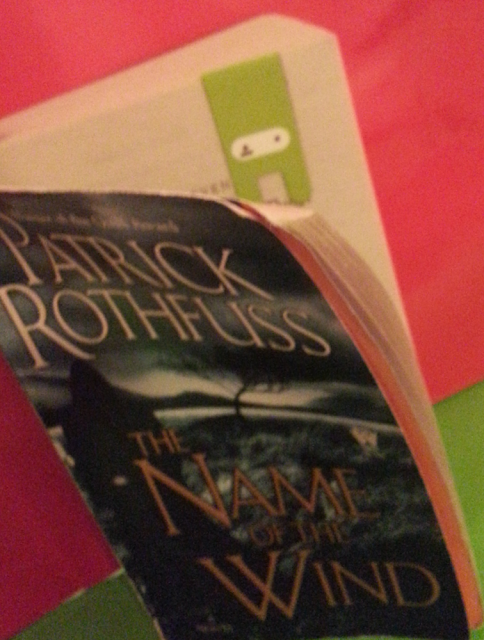 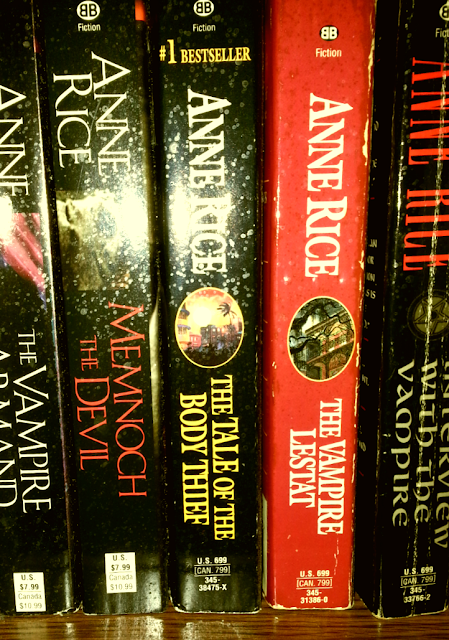 Two villains I'd like to see face off from books are Lord Voldemort from Harry Potter and Hannibal Lector from Red Dragon. Oh sure, one has the killing curse, but the other has those super psychological tactics. And we know that He Who Must Not Be Named got that way due to parental issues and bullying. My money is on the good... er... BAD doctor to win. Liver, anyone?

I read another two chapters of The Name of the Wind yesterday. #boutofbooks

Here's my rainbow of books.

I'm ready for a brand new #boutofbooks day. Looking forward to getting fruther in the book. Last night a friend (the one who loaned me the book) asked how far I was. "This far," I replied,  holding my fingers a tiny bit apart. He laughed and asked what scene last happened.

I've read the first 5 chapters of The Name of the Wind. I also read and edited a chapter of Brian's work in progress,  and Nicki's short story. 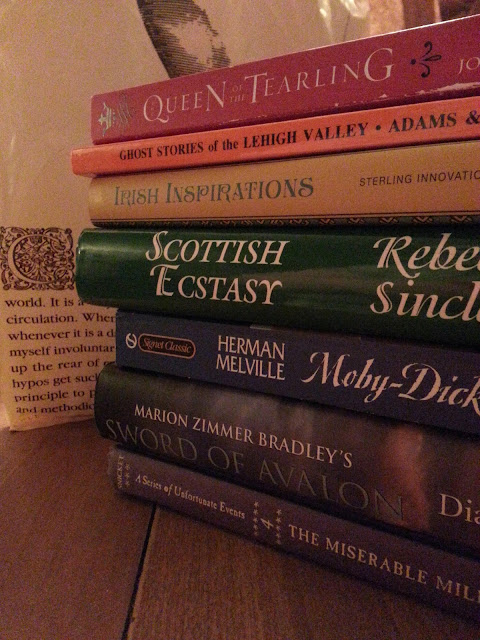 #boutofbooks challenge- would you rather

I rarely trust people enough to loan them my preciouses. The people I do trust are writers,  and therefore love books and treat them with the care that I do. Honestly, if I got a book back in either condition,  I'd just go buy a new copy. And I know what you're thinking, "but what if it was a 1st edition?" Ha ha ha- like I'd loan those of books I love. Better odds that I'd give a kidney or half my liver.

This question is too ambiguous. "Meet" doesn't specify anything. I "met" She-Ra at a store when I was 6 years old. Her costume wasn't accurate. She didn't know who Swiftwind was. And I "met" her after standing in line for a very long time, only to get less than 2 minutes to chat. Sure,  it was neat at age 6. But would I stand in line today to meet a comic-con version of a cartoon character? Maybe the Avengers,  but because of who they are as actors, not who they play. That's not meeting a character.

I'm going to have to go with meeting an author. Because "I was in line at the gas station behind Stephen King," still sounds interesting.

Tough call. "A" meaning only one, or are all of them implied? I love owning books,  so I'm going to go with the library choice,  and hope that I could still get into the two where my local Wrimos meet a few times in November.

Hmm... Harry Potter does, arguably, die in his book. And we see how that turned out. Game of Thrones... ha! Yet,  off the top of my head,  I can't name a favorite literary couple (that makes it). So I'll pick the break up.

Email ThisBlogThis!Share to TwitterShare to FacebookShare to Pinterest
Labels: boutofbooks

I am a #bookhuggles winner. The odds were ever in my favor since I played almost every day.

For #boutofbooks I'm reading "The Name of the Wind" by Patrick Rothfuss. I have two hours set aside today so far to devote.

My #insixwords to describe myself were:
A broken human reads and writes. 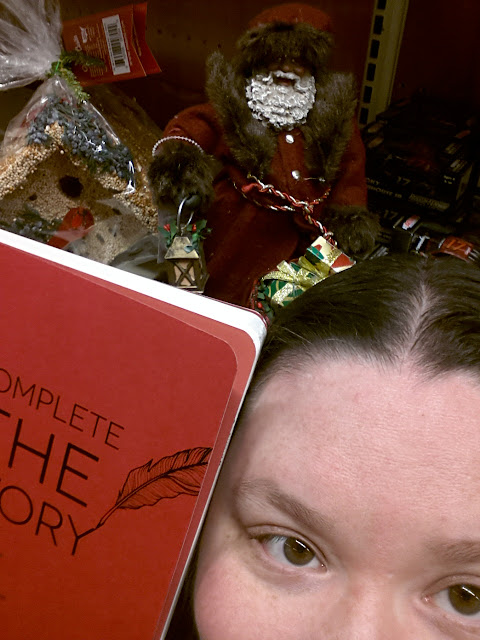 I was watching a television show.
Why is it that,  on a first date,  the person can buy you flowers,  balloons,  food, tickets to entertainment, or even gifts; but if the person gives you money (the equivalent of any of that),  it's a bad thing? It's possibly prostitution. So it's illegal (in many places).

Any thoughts on either topic?
Have a friend that would like to weigh in? 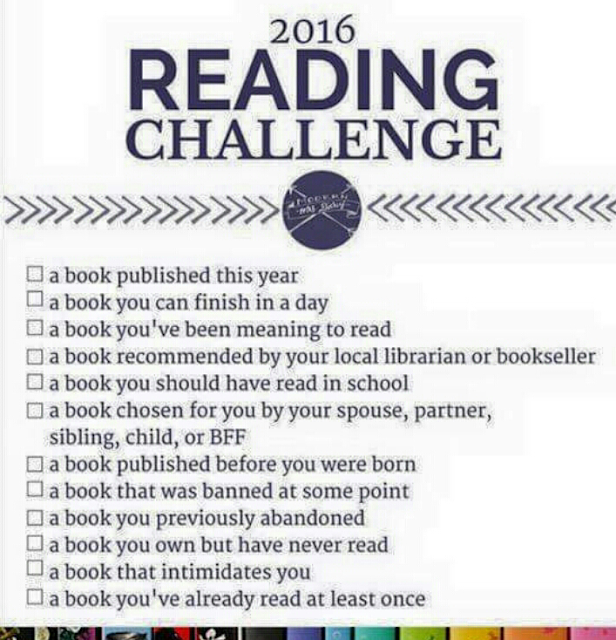 You are given a finite amount of time. Throughout your life you will be asked to trade this time. Some will be exchanged for sleeping. Part will be devoted to sharing time with those you love. Time will likely be traded for money, which is what we call work.

It is a choice,  how you spend your time. Not always a good choice,  of course,  but a choice. Those who are an exception to this rule always have it the worst, for they are incapable of even having access to the choice to die rather than suffer.

This new year,  this 2016, be mindful of time. Use it well. Trade it for happiness and betterment whenever possible.