More Mealey's - My Battle for the Furniture I Purchased

Your order was placed on 9/26/2019.  At the time your order was placed it was not in stock at our warehouse, in which case you were told by the person entering your order at the help desk it would be 3-8 weeks for delivery.   The 8 weeks would be by November 23.  I do not know who gave you the
date of October 11th, but that date was nit available.

I was told it WAS in the warehouse. Both by Nancy, my sales person, and then by the cashier woman (I'm sorry, but I didn't get her name). They both said Oct 11 at the latest.

Had someone said November, there is absolutely NO way possible that I would have bought this. There was another couch in your store I also liked. And there are other stores in the area. I didn't even want to wait until Columbus Day, when there are sales, because I needed a couch before then. Something you're perhaps aware of, as your store has been widely discussed among my peers. "Yes, this is the spot where there isn't a couch to sit on. Please enjoy our lovely floor because Mealey's lied to me about the delivery date!"

Maybe your computer system is out of date? Maybe your employees conspire to sell things you don't have? I don't know. It's funny that you're going out of business but wouldn't sell the floor model. Granted, the day I was at the Whitehall store, only your New Jersey location was actually going out of business, but all locations were having the sale. Seems your website has since changed that stance.

This is why you're getting letters by mail. And being contacted by the Better Business Bureau.

I've reached out to both the main store and the Whitehall one to try to track down furniture that was, no matter what you believe, GUARANTEED to be here earlier this month. (Which, again, I would NOT have bought it if even the possibility of November were mentioned.)

I was going to drive to the warehouse to pick it up, but was told that would take longer than having it delivered. I offered to pick it up from the store, but was told that would take longer still. Only paying for delivery got me the Oct 11, at the latest, date. "But since you're paying in cash, it'll probably come SOONER than that." (The cashier.)

And if you look at the invoice, it says that the items are in the warehouse. Not "being ordered". Not something "out of stock". WAREHOUSE. I can send yet another copy of that, if you like.

I have been extremely mistreated by your store. I don't know how high up the lies to customers go. The manager signed off on the purchase. There are initials. We didn't speak, but I assume Nancy didn't vanish into some office for twenty minutes for nothing.

How high up on the chain are you? Can you do an investigation to figure out where the policy of lying about delivery dates comes from? At least two people at the store looked at computer screens when determining a date. I was there with my husband and father, that's three people who witnessed this, who heard the date. Who saw them look at screens when they said the number. At different points in the interaction, mind you. Two different computer screens. (One near the couch in the store, to the right side as you're coming in the door. The other computer is at the cashier station in the middle of the store.)

If you aren't high enough on the chain, may I please be put in contact with someone who is? There's obviously something going on here. Finding out what isn't MY job.

I just want my furniture. I want what I paid for, and I want it this month as I went to a bit of trouble to get that date. I had to drive across town to my credit union to get cash, and then get that money back to the store. "The delivery team will contact you soon! Expect your items before the eleventh."

The company responded to your submission and we are passing it along to you.  The contents of this message are below or attached.  Please respond to this message in written form within 10 days.
The text of your complaint may be publicly posted on BBBs Web site

"MESSAGE FROM BUSINESS:
The furniture was a special order item which is not scheduled to arrive until November.
To clarify, though the store is closing, the management and operations staff will remain indefinitely to insure that orders are fulfilled."

I am rejecting this response because:

There was NO MENTION of it being a "special item" requiring additional time. There was another couch we were considering. Had anyone said, "this one will take over 6 weeks to come" we would have gone with the other. No, actually, on the sales slip, it says the item is at the warehouse. No mention of a special order from elsewhere. We would have gladly taken the one on the showroom floor, but that wasn't an option either. "October 11 at the latest," that's what was said, with a strong implication that paying cash meant it would come even sooner than that. 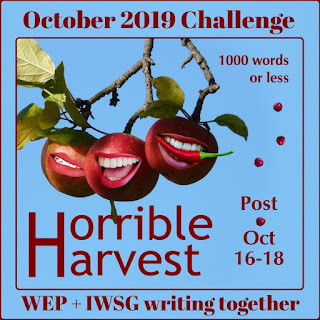 My offering for this prompt comes in the form of a correspondence written in a (possible) future. 500 words. Full critique acceptable. The first two paragraphs are based on a true event (except it wasn't oranges, her real name isn't Maria, and I don't know if she has a cousin named Angel in Ecuador).

I was born to nothing, as you know. An immigrant daughter of migrant workers in an orange grove in 2018 was as nothing as one could be. Perhaps harvesting fruit wasn't so horrible, once upon a time. But the grove gave no place to hide. Both my parents and three eldest siblings were deported when I was eleven. My younger sister and I landed in a border detention center not long after. Not sure if you knew that. She died in my arms.

I didn't know it then, but it was from infection. The sores on her body weren't treated. Sitting in her own filth for days made it worse. I remember telling the guards she was hot. They told me it was because I kept holding her, that my body heat was making her that way. They didn't care.

They do now. As you said in your correspondence, you know I'm a lawyer. Actually, I'm a senior partner at the most renowned law firm in the country when it comes to prosecuting those who ran those centers. We've won against every level in the chain of command, from the janitors who didn't meet required standards to the monster at the top who allowed the centers to exist. I had orange stripes painted on our third branch office, to represent the grove where my parents once worked.

No amount of money can replace my sister. Or the years lost with my family. I still wake up screaming in the night, fighting off the rapist guards who took me against my will. I'll never marry. Sleeping beside someone, much less marital intimacy, isn't something I can bear.

Instead, I've adopted wildlife. The lands and animals are my children, my legacy. I bought an area that was once a national park, back when such things existed. It would have been mined, drilled, or fracked by those who refuse to let go of the ways of the Industrial revolution. It's protected now, for the next five hundred years at least. I even have a provision to make it a country on to itself, should the States, Union, and New Confederacy break apart even further.

I invite you to visit, dear cousin. I realize you're busy running Ecuador and preparing for your journey, but I do hope you'll be able to make the trip here first. Neither of us has much family left. No one does these days with the shrinking population. But I wish for you to understand why I won't be among the ones on the last space ship to depart. I know all the reasons to leave, and that those who can afford it go. And I know how many have sold themselves into slavery to get onto the ships. I thank you for offering to spare me from such a fate.

But I will stay here. There are still people to help. And if the heat, droughts, storms, or radiation gets me, so be it.

Update from previous post:
Still no word on when I'll get the furniture I paid for in September.
https://uniquelymaladjustedbutfun.blogspot.com/2019/10/mealeys-furniture-delivery-scam.html
I have started a letter-writing campaign. Much harder to ignore actual mail, I hope!
If you're willing and able to help, please print and mail this letter: https://docs.google.com/document/
If you'd like to edit it: 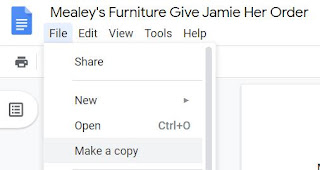 ATTENTION:
I bought a sofa at Mealey's Furniture. I've been trying to find out when it will be delivered. I was told paying in cash would get me the fastest delivery. I was promised it would come this month.
They're now saying my September purchase won't come until NOVEMBER.
DO NOT SHOP THERE FOR ANYTHING YOU CAN'T CARRY OUT OF THE STORE. I'd have taken the floor model if they let me. I was even told it would take longer if I drove to Philly to get it myself. LONGER THAN NOVEMBER?
This is your Public Service Announcement. The delivery is a scam. No wonder they're going out of business with a practice like this! 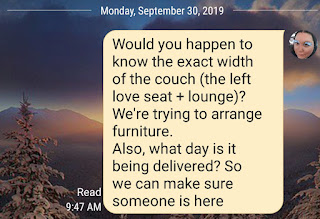 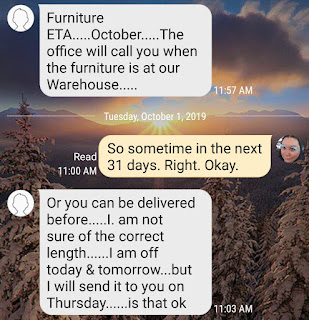 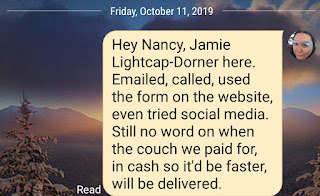 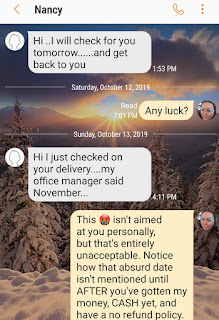 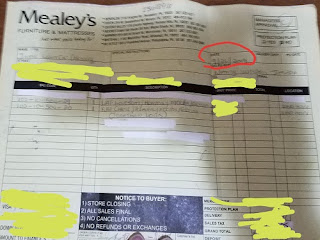 
Do NOT buy anything you can't carry out of the store that day from @FollowMealeys Mealey's Furniture! Here has been my experience so far:
(6 pics so far) pic.twitter.com/y1Ax2bmyDL