No one asked me if I wanted the bank I use to be bought.
~No, by the way, I did not.

No one asked if I wanted a new bank account number and new routing number.
~No. If I was willing to deal with that hassle, I'd have SWITCHED BANKS!

My husband has direct deposit. HAD...
It was necessary to update our bank account information to continue to use that. But his work system isn't updating.
So he's getting printed checks.
Post dated checks.
That I can't deposit until Friday, and can't clear until Saturday.

I can't.
I just can't deal with this pressure. With needing to get the shopping done before Saturday, but not having the money until Saturday.

I hate BB&T. IF THEY DIDN'T BUY MY BANK, I WOULDN'T BE FREAKING OUT RIGHT NOW.

I'm including a screenshot of a post written by my friend.

He has a full time job. He is an average American citizen.

And this is why we NEED to fear bio terrorism. This is why it would be so effective.

Yeah, we've got some great doctors here. Maybe some of the best hospitals. Probably a bunch of ground breaking awesome. And the CDC is kickass awesome.

But PLEASE see the problem.

I had a friend in Canada. She didn't feel well at 3am. She got free transportation to an emergency room, was seen and treated, and came back home within 3 hours already on the mend. This cost her ZERO dollars. She did not need to wait for the bank to open to apply for a loan for $300, and subsequently be turned down, and then go try to buy some over the counter stuff that doesn't work, infecting others along the way.

If you watch The Walking Dead and wonder how anything could spread so fast, here you go.

This is the thinking not just of my one friend, but of everyone I know who isn't 100% covered by some government provided insurance or isn't sitting on a bank account around the billionaire mark.

And the promise of the incumbent, Donald Trump,  is that we'll have less access to health insurance and it'll cost more.

Our military is so powerful that we could take on everyone and not even blink. Our military technology is so up to date that we sell our old crap to anyone because we don't have space to store last year's junk.

But sneeze and it's good bye 'merica.

And that's why I think it's so important that EVERY LIVING HUMAN in this country have access to fully funded health care. So if anyone in our borders feels a sniffle coming on, they go deal with it.

That's how you fight bio terrorism. That's it.

We could build 10 nuclear weapons for dropping on each and every country out there. Not only would that kill us all (MAD), but it still wouldn't fix a bio terrorist attack.

I'm not a politician or military strategist. So if I can figure this out, you can be certain that our enemies have too.

And given our ethics of NOT staying home when ill, it's guaranteed that it'll spread. No one can afford quarantine,  especially if they might need meds. We'd need Marshall Law to keep the sick home. And the ones trying to enforce it would get it. There's only so many bio suits. Containment breaches would happen.

This isn't a plot bunny. It's not the basis of a book, movie, or tv show. (Though they exist.) This is reality. This is what happens when everyone doesn't have equal access to health care. It happens when the sub-par care is all you can afford, so you avoid that because you have a job and shouldn't have to take from those worse off, plus the wait is ridiculous.

The whole system is broken. Top to bottom. It's not fair to patients or doctors or other care givers.

I don't care if it's fair to health insurance companies, because a computer should not decide what care is best and what medicine a person is entitled to take. The computer didn't go to med school. The computer hasn't met the person. The computer is NOT QUALIFIED to make the choices. Skynet bad, remember?

Hopefully the politicians,  who have access to great medical care and therefore aren't directly affected by this,  will fear the janitor getting sick from an attack. Or the wait staff. Someone they pay little attention to but who might spread it because they don't see a doctor. That fear might, maybe, get health care access improved. Hopefully before I turn out being right.

I'd rather not have an "I told you so," about this. 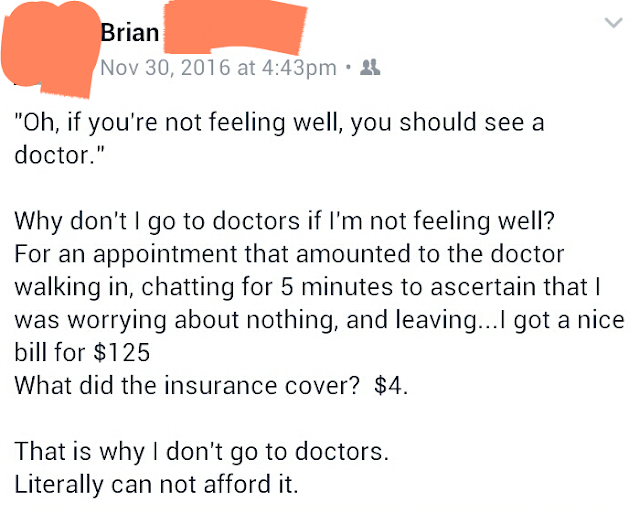