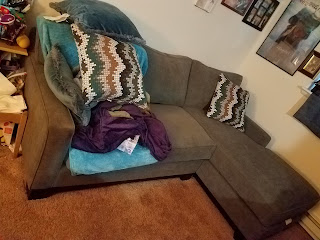 At long last, the couch came. Beyond all the previous drama listed on this blog, there was also a time period where they brought the wrong item, TWICE, and I had to wait additional weeks before they made it right. This included a day where I absolutely freaking lost it and, while shaking with rage, I screamed at the customer service guy who promised me the right items would come before Christmas. I honestly didn't think I even could yell like that anymore. I didn't think I had the lung capacity. My body paid for that little outburst later. But my neck felt so good! Like letting the tension out for the first time in years.

The bedroom still isn't fully decorated or unpacked. My husband has stuff stacked in such a way that I can't address the issue without him here. But he has been exhausted on the weekends.

Actually, we've both been sick a few times this month, so I don't have the energy to care.

I'm trying really hard to stick to a budget this year. I thought I was doing really well! But as I sat here tonight trying to figure out how I was missing $300, I realized it's because last year still hadn't gone away. I had "borrowed" some money from this month's budget to cover part of the rent. Also, the next check comes on the seventh instead of the fifth-or-sooner, so I had to pay one of the February bills with January money. So, for a brief moment I thought I was ahead, but because of a fail last month and an early payment this month... whoops, behind instead. Also, my husband works 10 hour days, but only gets paid 8 hours on a holiday day off. So there was a shortage thanks to New Years'.

When I did this in May of last year, I was spending 116.02% (meaning more went out than came in, so I had to use my savings to cover the rest).
January 2020 was 102.79%.
(Considering the savings account has been severely depleted, it'd be great if I could get that number back down to under 100%.)

The big issue I see with February is that John and I both have doctor appointments this month. Sadly, unless I find a cut to make, it looks like February will be 103.5% spending. We'll see how it goes.

I know I was sick, so I didn't do things. But that's just... that's just horrible. That's slam-my-head-on-table horrible. I have to do better. I must be capable of more.
Posted by Jamie at 12:21 AM 1 comment: