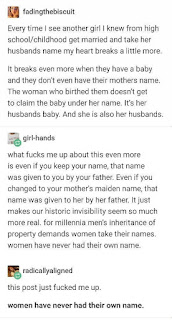 Do you know what's really interesting about this? It IS NOT universal.
That's right. There are religions and countries where a person does not change any part of their name when they get married.
It didn't even come up until the ninth century, according to this article: https://seattlebridemag.com/expert-wedding-advice/history-behind-maiden-vs-married-names
("The 9th century was a period from 801 to 900 in accordance with the Julian calendar in the Common Era.")

So you can't say that women have never had their own name and be accurate. You could, however, state that a recognized percent of women have not had the right to select their own name, keep their own name, or give their children their own surname without repercussions for the last one-thousand-two-hundred some years. Especially women in countries conquered, controlled, or heavily influenced by the English. Which, honestly, is a pretty high number.

I just wanted to share that fun factoid. It wasn't something I ever considered until I had a penpal in Egypt (about twenty years ago). She was getting married and I asked what her new name would be. She was baffled by the question. It took five months of letter swaps before we understood the cultural divide.

She wasn't allowed to listen to music or be seen without a headscarf- hajib, but keeping her own name after marriage was normal.

I hyphenated my name in most places. There are a few places, like my health insurance, where my name isn't hyphenated. (I honestly don't know why. But it is his insurance.) And places that never updated my name (been ten years since I sent the paperwork to have my stocks updated, hasn't happened yet). I made the choice because I like my husband's surname.

One of my best friends has a really cool last name. Her husband changed his to match hers. I think that's awesome.

Another friend of mine has renamed himself as part of his new identity. It's a pagan thing, or a Scandinavian thing, I'm not sure. But that's pretty cool, too.

Email ThisBlogThis!Share to TwitterShare to FacebookShare to Pinterest
Labels: names