I recently came across a post on Facebook where someone suggested that school prayer needs to be required again.

Will all religions be included? What about atheists? And would that mean the school day is longer, it replaces the pledge, or that a school subject gets less time?

I'm not going pro or con without that information. A few extra minutes a day for "silent meditation or prayer" would be fine. I'm not sure Americans are ready for the five times a day prayer required by some religions. I don't think that could work in capitalism. Then again, some places allow smoke breaks, and prayer might be the same amount of time.

I would suggest a non- denominational room for prayer so students could ask to go use it. But some teachers already only allow two bathroom breaks per school year per student. So I don't imagine prayer room use would get better treatment. And what about during the most special standardized test days, when no one is allowed to leave the room at all? Is prayer canceled then? Less time for the precious test? Longer school days required during standardized test days?

Plus, there's a lot of issues where adults attack other adults while worshipping. There's already violence in schools. Adding religious tensions? Oh sure, it sounds like some religions could be able to teach love, acceptance, and understanding of everyone... but the history department is over there with a boatload of wars that never seem to really end which kind of prove otherwise. How can that be dealt with? Who could be in charge of making sure the message of any religious group isn't one of hate, one that alienates some people for who they are?

But really, the biggest question I have-- okay, what if Congress brings it back, but it isn't your religion? What if they toss them all in a hat and pull one out. "JAINISM!" ...and now that's the type of prayer said over the intercom daily?

Yeah, every student would hear a prayer from every religion. Would Americans be okay with their children being exposed to two different religions every school day? (We're talking about people who brought back diseases because they didn't vaccinate.) 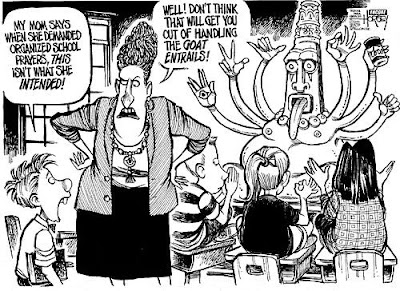 I think this is the side of the debate that gets ignored. But I think it's the most interesting part of it.

Extend the school days by 20 minutes. 10 extra minutes in the morning and 10 in the afternoon to hear a prayer and short summary of a religion. That's an interesting concept. Not sure how it'd get voted in though. But sure, that's an interesting idea.

Perhaps every religion that wishes to be included has to raise money to fund their 10 minutes. To pay for the staff that has to stay, the cost of keeping the building open a little longer, and a fee to cover any violence, graffiti, or lawsuits as a result of this experiment. There would need to be a guarantee that the trial lasts long enough for all of the relgions who sign up to be heard. (Between 11 and 12 years.) This also means no one can argue, "I ain't paying school taxes for them to teach some other faith to the damn kids!" No, in fact, you wouldn't be. Each faith has to pay the same amount. They'll have to raise that money from their followers.

(Religion is about money, right? You can't worship if you're poor, right? Pretty sure that's a thing. Your religion has to self-fund in order to be recognized. And it doesn't get taxed on that money. Yeah, pretty sure we've already set up that system of recognition.) 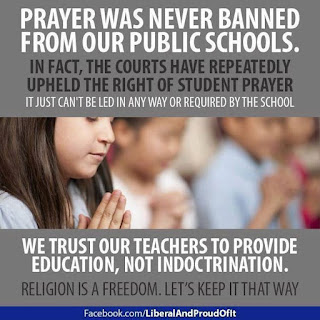 Percent of world religions.
Is this the argument? Whichever one has the most should get to be the one taught? Seems like it means that's the one that most people would already know, and therefore it's all the others that should be taught, as that's where the lack of knowledge is.

Equality, even and especially in education. What if we give it a whirl?
Tweet