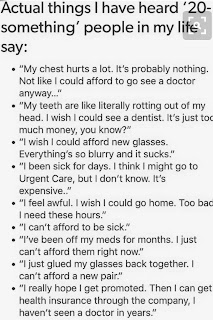 I just saw this on Pinterest. My immediate comment was to ask who DOESN'T say these things,  other than the ridiculously rich. Being twenty has nothing to do with it. We thirty-somethings and the forty-somethings, and my fifty and sixty-something parents also say it.

I can see how other countries might be surprised and confused, but who the hell in America  ('Merica) doesn't know that this is the state of things? Do we have a citizen that's been in a coma since the Carter administration or something?

Seriously, this is the most "no shit" pin I've seen. Toss in a note about the sky being blue and the moon not actually being made of cheese and maybe you've got something.

What the heck was the point here?!?