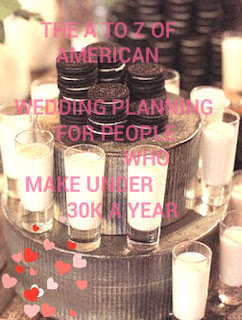 You can reuse these wonderful volunteers at the reception! Lead people to the photobooth. Make sure they get in a picture at some point.

Don’t be that couple. Unless “Uncle Jim” has a legit reason for avoiding pictures (religious belief, witness protection, etc), be sure to snap at least one. The bride and groom do not have time to make sure this happens. But you can assign people to the task!


That was one of my tips for making sure you have a picture of everyone on your special day. The other tip is to give a list to the photographer.

But not just a list people you want pictures with, but also of pictures you want.


Any professional photographer will expect you to have such a list, and probably have dozens more ideas to add to it!

They are sticking around, after all. I mean, you're going to feed them.

Feed who?
Yeah. My last budget tip for the A to Z of American Wedding Planning for People Who Make Under 30k a Year is to remember to budget food for people you've hired. The minister and a plus one will probably expect it, even if they say they don't. The photographer almost certainly expects it. Catering staff might also require it. The DJ probably needs to be fed. You get the idea.
Tweet

Email ThisBlogThis!Share to TwitterShare to FacebookShare to Pinterest
Labels: #atozchallenge, A to Z Challenge, A to Z of American Wedding Planning for People Who Make Under 30k a Year, photo booth, photography, pictures, QR code, wedding